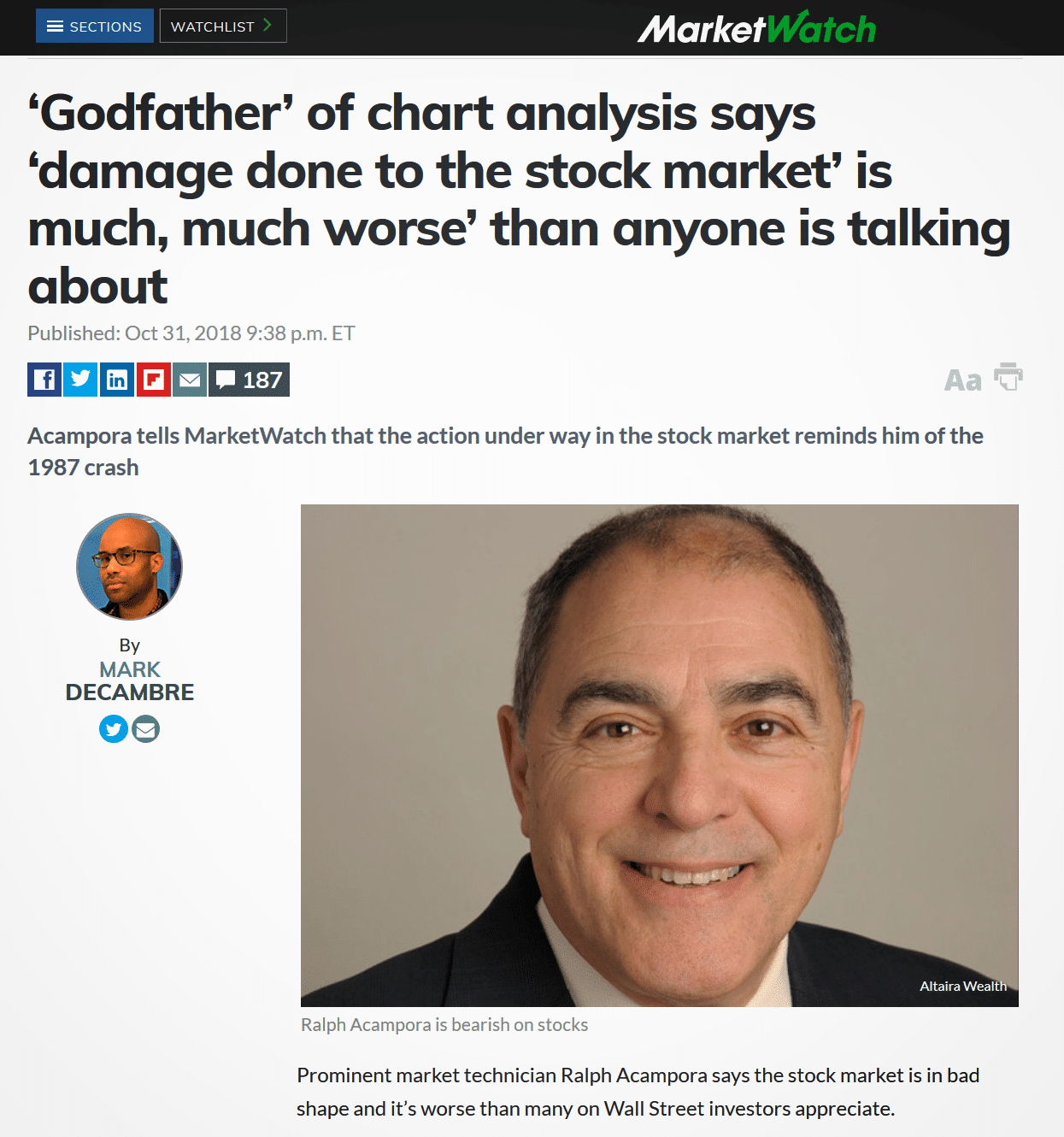 Last night Ralph Acampora explained in an interview with MarketWatch that the current market situation reminds him of 1987. We’ll see whether or not Acampora is right. As I am writing these lines, some colleagues are already pointing out to me that he has been off so often. Sure. True.

As investors with a private-equity approach, our decisions are not based on charts alone. But charts are an important element of behavioral finance, which is highly relevant to us.

Apart from Ralph Acampora, there is a much more present bear who has been on target with his statements since the summer: Michael “Mike” Wilson, Chief U.S. Equity Strategist & Chief Investment Officer at Morgan Stanley. “The man who saw the selling coming,“ is how Scott Wapner, host of CNBC “Fast Money Halftime Report” welcomed him at the “Halftime Report” on October 25. 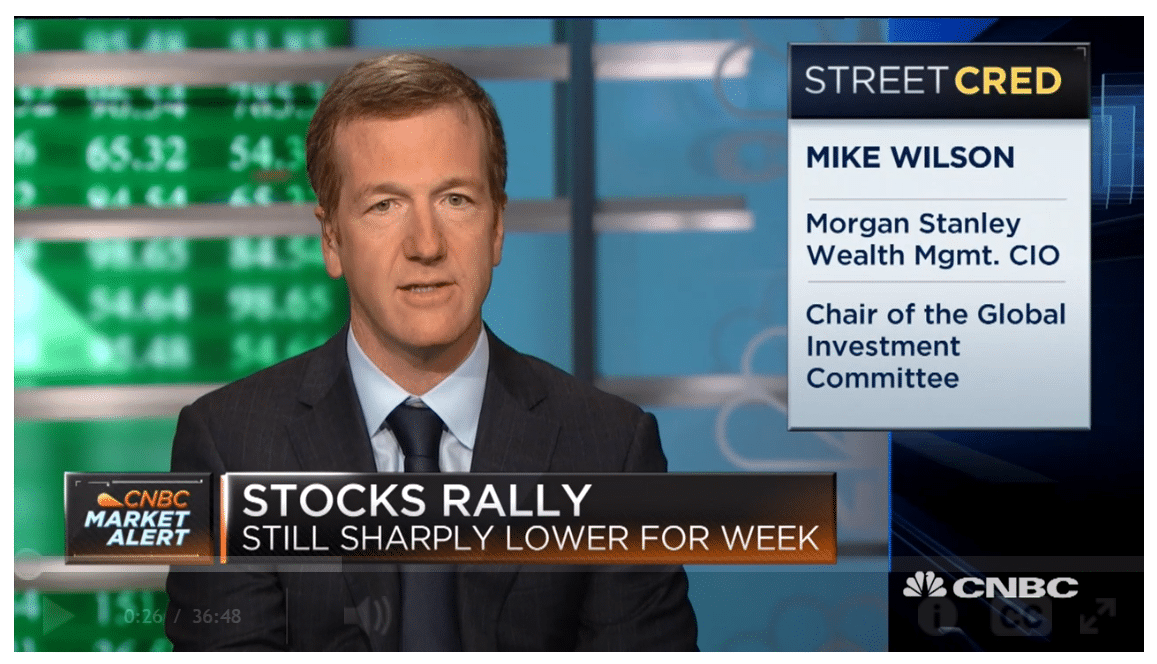 One year ago, on the “30th anniversary” of the crash of ’87, I went in my basement to find my thesis. Title: “The price crash at the stock markets in the fall of 1987—presentation of the course and explanatory approach,” Kiel, 1988.

One year ago wasn’t the time to make a connection to history. I view this differently today and, as a result, am making the following comparison in four paragraphs:

Making the four statements presented in this article publicly on CNBC, Mike Wilson has qualified himself perfectly as highly relevant evaluator of the current situation. 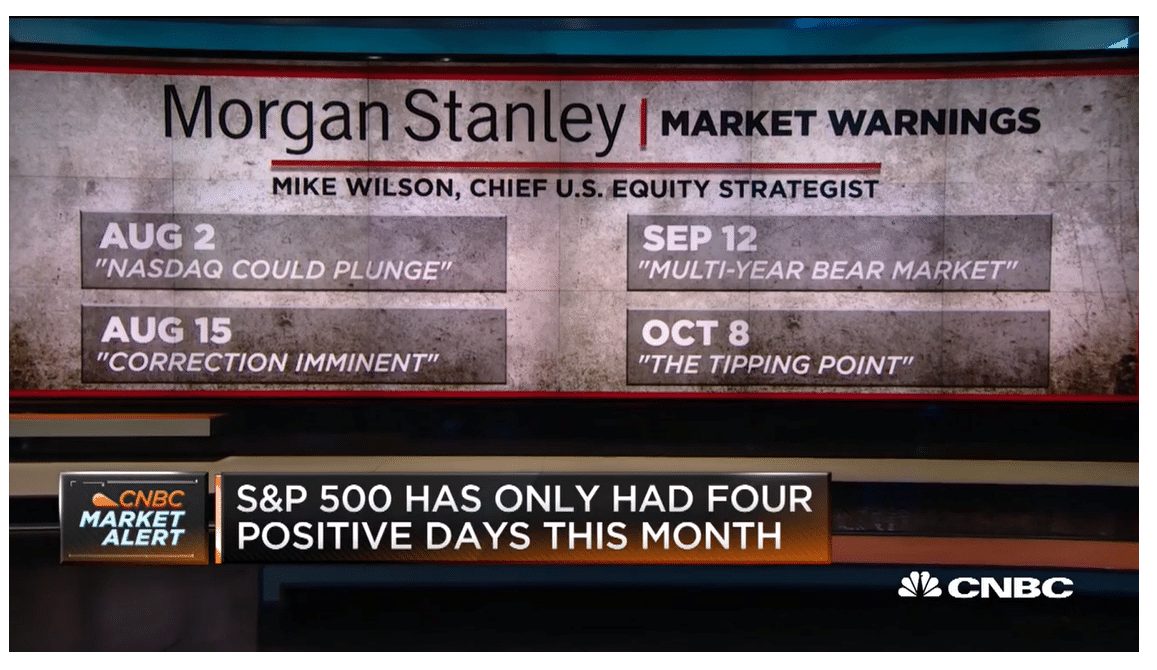 You may wonder what made Professor Reinhart Schmitt, my professor and future thesis adviser, accept my topic for a thesis at the time. It was probably important that—amongst other things—I had not only very closely watched the events at the stock market before the price crash of 1987 since the beginning of my apprenticeship at the Dresdner Bank in Frankfurt am Main in August 1984. I had also been very active at the markets. In addition, I was able to convince the Analysis department of the Dresdner Bank to support me in my thesis. I had worked there in September before the crash and witnessed the final phase of the development firsthand.

“A comparison of the absolute height of the PE ratio shows the high level of the valuation gains in Japan. This had prompted numerous analysts before the price crash in the fall of 1987 to predict a price crash for the Japanese market. […] Although the valuation level for American stocks was at historic highs as well, a correction was not expected due to this development. Different European stock markets (Germany, Switzerland, Netherlands) were already showing a low PE ratio compared to the U.S. and Japan before the price crash.  This circumstance was used to explain recommendations for investment for these stock markets.

“However, the fact that the price crash of 1987 didn’t originate in Japan and European stock markets were recording particularly stark price declines in the fall of 1987 shows that the level of the price-earnings-ratio alone does not suffice to explain the price crash. Apparently other factors too are significant for the development of the stock markets.”

The good news is that the bear market has been going on for longer than people think—since December 2017/January 2018. What is new is that now not only stocks are falling at the emerging markets and in Europe but also in the U.S. “A lot of damage now” for tech, growth and small cap stocks. But 80% of the correction is done at this point.
Wilson sees the real opportunities outside the U.S. since the bear market has been underway for so long there. He continues to be cautious with growth stocks and finds cyclic stocks more exciting as the correction has further progressed for them.  With many of these stocks a possible recession has already been priced in. 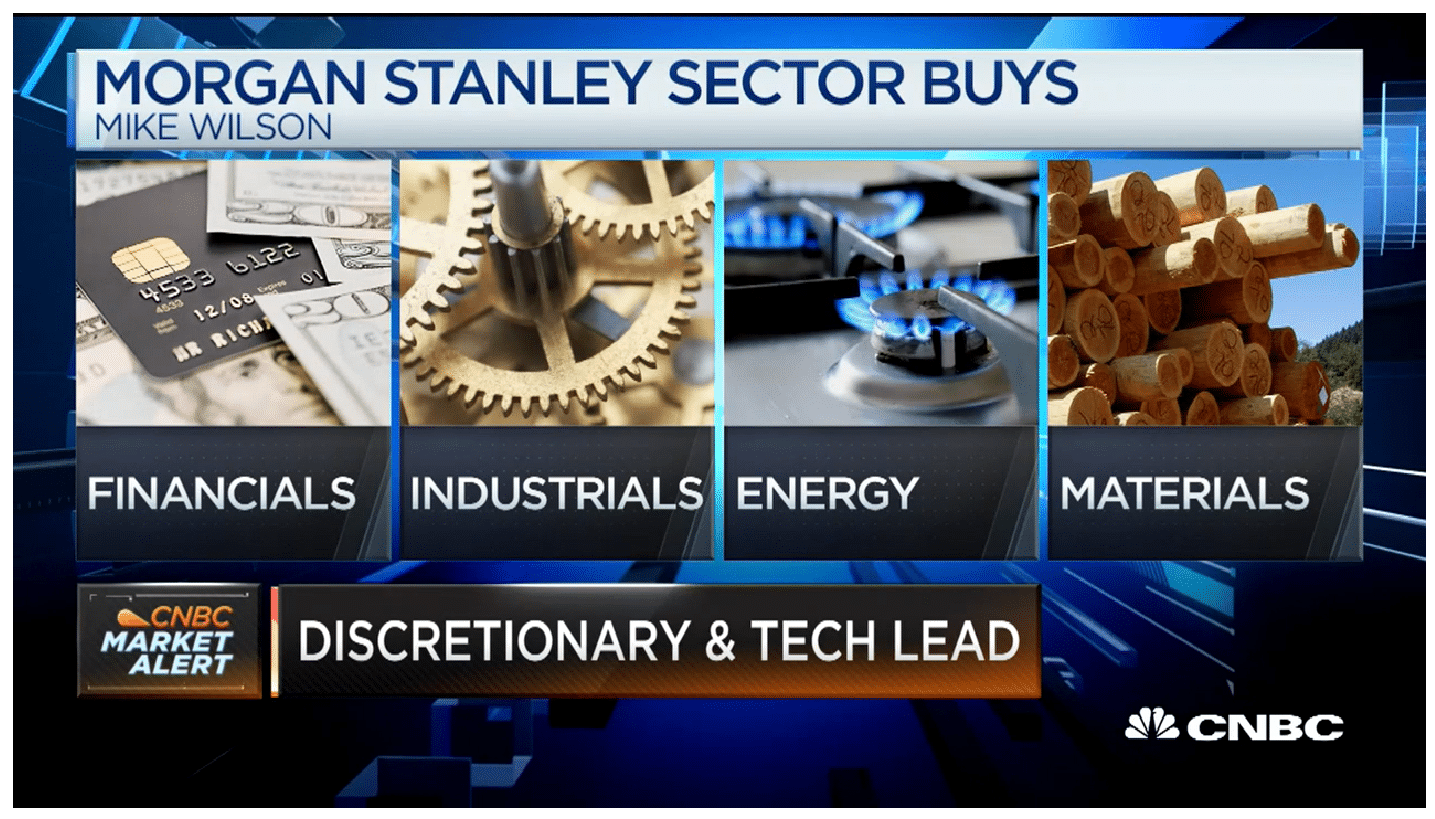 The stock market has a sense of humor. At the time of Mike Wilson’s statements, “Discretionary & Tech” is airing—sectors that he doesn’t recommend…

“Interest for 10-year U.S. government bonds had fallen from over 13 to approximately 7.5 percentage points since 1984—a decline of about 40%.  The direction of the interest trend changed in the spring of 1987. Within 9 months, the long-term U.S. dollar interest rose over 30% from its low up to 10.25 percentage points on October 15, 1987. Interest for shorter terms underwent a similar development, and the U.S. bank rate was raised from 5.5 to 6 percentage points in 1987. These developments caused massive fear of interest rate hikes at the financial markets.

“In October 1987, a real interest of over 5% (inflation rate of approximately 4.5%) was achieved after the massive interest rate increases for long-term U.S. bonds. The return of a stock portfolio was at over 30% in early October after the significant price increases since the beginning of the year.  A new valuation of the return-risk-ratio of stocks and annuities by the market participants resulted in massive portfolio shifts in mid-October after nominal interest for long-term bonds had increased to over 10 percentage points.  There was the sale of stock and the purchase of less risky bonds. A bull market for annuity prices made the long-term U.S. dollar interest fall under 9 percentage point by late October.

“The rise in interest, especially in the U.S., can be considered one of the critical causes for the price crash in the fall on 1987.”

The main reason for this bear market is liquidity. Global liquidity is drying up. The Fed is tightening, the ECB is tapering and, at the same time, there is a higher supply of bonds due to the rising national debt of the U.S. If the price declines continue, the Fed will back off at some point. The rise in interest will come in December, but maybe the Fed will signal that in 2019 the next rise in interest will come slower than expected today. Then the markets will go back up and the riskiest investments rise the most.

3. Additional problems for the market

“The description of the liquidity development shows that especially in the U.S. a changing course of the Federal Reserve toward a more restrictive monetary policy has contributed to the rise in the nominal interest rate.

“The fact that the change in course of the U.S. Federal Reserve took place long before the price crash should make the financial market participants pause and think. After all, the potential for a blowback that had built up in October of 1987 didn’t only arise from the course change of the Federal Reserve but also from the price increase of the U.S. stock markets over 30% [since the beginning of 1987]. Explaining the rise in interest merely with a more restrictive monetary policy seems incomplete. Apart from the decreased amount of money the increased fear of inflation—whether  justified or not—caused interest to go up, which was difficult for the FED to keep tabs on.”

The U.S. Government is making trade policy in a way as if it is not going to have much of an impact on the economic development. But the tariffs have a negative impact on the supply chain market. This has a negative effect for the profit margins of companies in 2018 as the current reporting season is showing.

Ultimately, company profits hit a peak in growth—which isn’t a recession yet—and tariffs are an additional burden for companies in this critical situation. The entire economy is at risk as bigger earnings declines for U.S. companies in 2019 (Q2 and Q3) are to be expected. Wilson said he had been making this call for a while. The main reason for this is cost going up significantly while growth is decelerating. The trade policy is making this situation worse.

This is no place for the topic of “chain reaction,” which is widely discussed in connection with 1987. The stock markets recovered relatively quickly in 1987 and the price crash had no significant impact on the economic development in the following years. The reception in the movie theater and the lasting memory of a chain reaction of a new kind in the brains of those who witnessed it was more significant. I will be happy to discuss this more in-depth another time.

is expecting a multi-year bear market but does add that this has begun back in December 2017/January 2018. In addition, he doesn’t expect the S&P to fall significantly below 2.400 points.  But he also doesn’t believe that there will be a significant price increase of the index as was the case in the last years. The consolidation phase may last into 2020. The bear market is a lateral market in which it’s difficult to make money with the strategies of the last years.

On a positive note, the general bull market, which started six or seven years ago, will continue after that. And many stocks at this point are already not far from a level where it’s interesting to purchase.

It may not all be just “FANG” in the future, I’d like to add. And the fact that indexes will be going sideways if FANG keeps correcting can be calculated with a simple multiplication table considering the weight of these stocks.

We are convinced that stock pickers will have better chances of an outperformance than in the past.

But we can be cautious.