Yes, even if you don‘t believe it—our risk indicator is showing a GREEN light

In risk management we use different systems providing indicators so that we can get an idea of the markets that goes beyond a superficial analysis of the situation. Of course there‘s no master indicator. The situation as far as information goes is like that in the cockpit of an airplane with numerous instruments. Some are used more regularly, others less. But in the end—just like in an airplane—it is a human who decides and who can make a mistake in his interpretation of indicators.

In the following, we are briefly discussing a risk indicator that we have followed with interest, that has a longstanding history and that has offered great indications about the market risk so far.

It may be a platitude, but it‘s true: It’s the prices that make news—not the news that make prices. The process is always the same. Important prices change, and subsequently the interns at the news desks are looking for explanations in the agency reports. And when none can be found, longterm observers become particularly alert.

Prices are created through actions, whether it‘s from private persons, institutional investors, or computer programs (algorithms). And all three groups also use—consciously or subconsciously—indicators that influence their decision-making. Among them are, for example, the much quoted (but in their meaning probably way overrated) 50-, 100-, or 200-day lines of the charts. So are relative strength, relative weakness, Bollinger bands, advances and declines, and many more. The variety of indicators can easily keep up with the selection in a well-assorted wine store.

III. Risk and the stock market (short and sweet)

Harry Markowitz laid the foundation with his basic model.  The so called Capital Asset Pricing Model (CAPM) describes how investors combine different investments to put together their portfolio. The Nobel Prize was awarded for combining various investment-specific returns with the corresponding investment-specific risk. The definition of risk is relatively simple according to Markowitz: high fluctuations in price = high risk, low fluctuations in price = low risk.

William F. Sharpe (also a Nobel Prize recipient) recommended to always add a stock to the portfolio when additional returns aren‘t correlated with that of the portfolio. The lower the correlation of the returns the more interesting the inclusion of a new investment into an existing portfolio.

Barra is the third name in this context. Not Mary Barra, CEO of GM, but Barra, the worldwide leading company for systems for risk managment, which after its acquisition in 2004 is now part of MSCI. The probability that big institutions make their decisions on stock investments after consulting with Barra Systems is certainly higher than the probability that Bayern München will win be the German soccer champion.

The main topic in this context is the question how different investments and portfolios are correlated. An important problem is which period of time is used to calculate the correlation. Options are daily, monthly, and yearly data. “For the long run“ or, as I like to put it, for investment horizons until the grave (i.e., 40 years and more) the recommendation is oftentimes to calculate the correclation based on the observation of historic periods over five years.

One problem remains: what do investors do, whose horizon is less than 40 years?
Systems designed for the long term could be predicted neither in 2002 nor in 2008 in the situation of crisis. But precisely for this purpose many investors would have needed risk systems.

One solution is the use of Value at Risk (VaR). These types of systems try to avoid the problem of the five-year-period, which would always make them too late. Hence, VaR changes the perspective. The goal is to answer the question how much a given portfolio would lose in a crash.

The use of Value at Risk comes with problems, too. In market situations with low volatility (as was the case, for example, in 2017) the systems systematically underestimate the potential risks. Ultimately, volatility itself is one of the most volatile and hardest to predict influencing variables at the capital market. Physicists might say: Welcome to Heisenberg’s uncertainty principle.

The first quarter of 2018 is a great example. VaR calculations with the volatility of 2017 led to completely inaccurate results (have fun with your robo advisor is all we can say).

That said, this is where the exact mechanics of the risk indicator introduced today ends. We‘ll be happy to go into more detail—but only in a personal conversation.  Because we collaborate with proven experts for risk assessment, we are able to offer together with them individual solutions for other asset managers. The following graphic is an interesting example on this day. 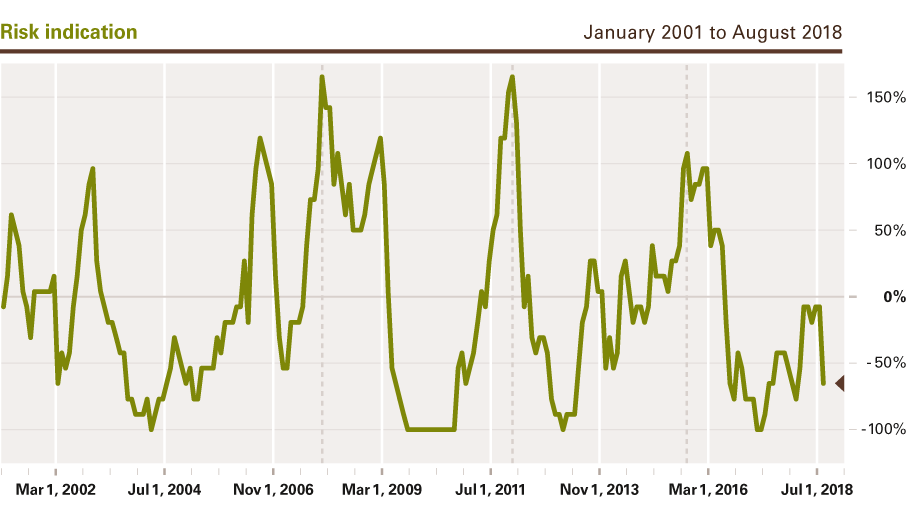 Depicted is the period since early 2001. The curve is always showing peaks when crises occurred.  Easily identifiable are the peaks in 2008 (Lehman) and 2011 (first Greece crisis with first price parity EUR/CHF at 1.00). The crisis in August/September 2015 and Q1 2016 can be detected as well.

The indicator is negative (the light is RED) as soon as values above zero are indicated. It doesn’t go lower than -100%.  On the bottom at -100% the risk light is basically triple GREEN. We classify phases as yellow when the indicator is moving from the bottom upward toward zero. It‘s not hard to see that this was the case “until recently.“ The indicator is currently falling massively—which means that the risk situation is improving.

An unpleasant surprise may still be waiting behind the next street corner, and this indicator doesn’t really help with the question what should be bought or sold. It simply says: if you want to sail out on the sea or plan to climb a tall mountain, do it now. The general weather situation is more favorable than before.

Because we currently don’t have an intern, we had to look up the explanations for the current improvement ourselves.  And we did. I‘ll spare you the current intermediate status though and recommend: subscribe to our newsletter, and you‘ll find out right away when there are news about the stock market.

Mellinckrodt » Updates » Yes, even if you don‘t believe it—our risk indicator is showing a GREEN light