Short positions built in November come to fruition in December 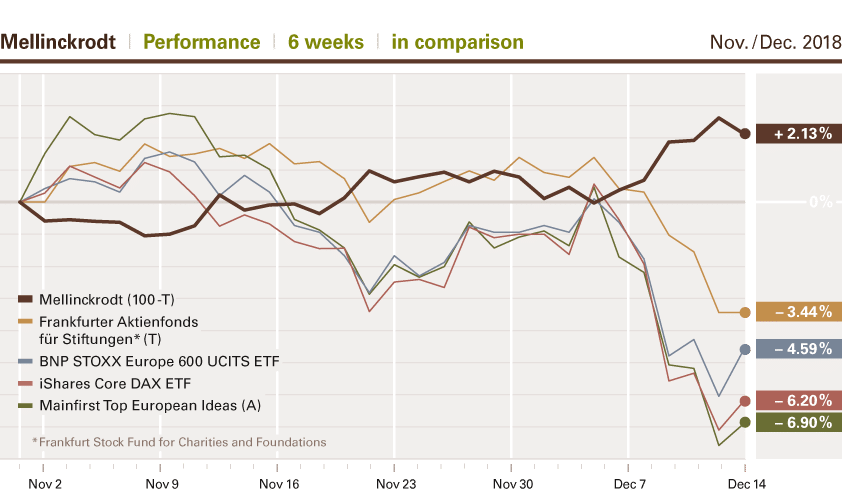 1. What is important for fund investors

After hedging the portfolio to a stock quota of 0% in October, the downward trend in the markets continued. This offered an opportunity to build up short positions.

This means:
1.
that the hedging positions exceeded the amount of retained stocks at the end of November

2.
that the amount of hedging that exceeded the balance of the retained stocks, came out to 26.04% of the fund volume at the end of November.

3.
For the first time since the fund launched, the balance of the stock position of the fund is net short.
In other words: the fund’s value rises when stocks fall. This was the case particularly at the beginning of December (see chart above).

4.
As of today, the net exposure amounts to -10% of the fund assets.
This means that the fund is still short but to a lesser extent than in late November.

2. Change in strategy and outflow of funds

The idea and goal of the fund initiators is to depart from a pure long-only strategy with hedging toward the primary goal of capital preservation and the goal of a lateral development of the fund price in the current risk phase. For some umbrella and mixed funds this positioning is not attractive. As a result, our fund has experienced some outflow of funds, and we expect that this will still be the case in the next months.

Regardless of this, Mellinckrodt continues to be attractive for all investors who don’t want to permanently leave the stock market but who want to invest in stocks again when the situation is more favorable than it currently is.  As soon as the opportunity-risk-ratio at the stock markets has significantly improved, Mellinckrodt will focus on investments in stocks again—not only large caps but also small caps will be an option.  It is important, however, that the view on the overall situation will be clearer than it currently is.

3. Press reports about the positioning in late October

The reasons for the positioning of the fund with 0% stocks at the end of October were subject of an interview with Fundplat:

The interview and the current article “On Stocks” resulted in a report of the Swiss investment magazine Cash about the positioning of Mellinckrodt in late October:

Currently, the fund continues to be positioned “net short,” even though with -10% not as much as in late November. We published our projection on LinkedIn that we are not expecting a year-end-really but rather a SANTA CLAUS G20 crash. The topic “year-end really” is still not off the table, but we believe that chances are significantly smaller than the projections of many investors.

In the new year there’s a big risk that the topic “Brexit” will initially have a negative impact on the overall sentiment due to the vote of the British parliament that has been pushed back to January 21. A true hard Brexit certainly holds the potential, due to the already weak economic development, to plunge Europe into a recession. The members of parliament in London will probably further try to avoid risky decisions. However, this doesn’t prevent the markets from initially pricing in a possible negative scenario. A very negative stock market development at the beginning of the year definitely has the potential to influence the current deadlock in parliament and result in an agreeable solution rather than in a hard Brexit. That will certainly be very positive for Europe in general and the stock market in particular—if this will indeed be the outcome.